Sacrewell’s top of the hops

Spring is a time for new beginnings which is why Sacrewell is proud to announce its new project with The Grainstore Brewery in Oakham.

The Spring Fair is a celebration of spring in the countryside and will feature sheep shearing demonstrations, milling in Sacrewell’s 18th century watermill, breadmaking, Maypole dancing, Morris dancing and much more…

PR and Communications Manager Megan Allen said: “The Spring Fair is always a brilliant community event. We work with groups such as Peterborough Morris and The Grainstore Brewery to promote the best of the rural area surrounding Sacrewell.

“The new beer encompasses Sacrewell’s rural heritage and as an agricultural education charity, we’re proud to still be working with local businesses and producers after all these years. The picture used on the bottle was even painted by a local artist-Neen Sidnell.”

The mill at Sacrewell stopped producing flour in the 1960s due to lack of manpower, but was reopened last year after a £1.8m restoration project part-funded by the Heritage Lottery Fund.

Megan added: “I think the millers of Sacrewell past will be proud to have an ale named for them. They’d have been first in line to try it at the Spring Fair as well.

“It comes in a bottle that celebrates the mill, so will be a great souvenir.”

Miller’s Ale will be available from Sacrewell’s gift shop from 21 May priced £3.10 per bottle and a cask version will be served at the launch during the Spring Fair. 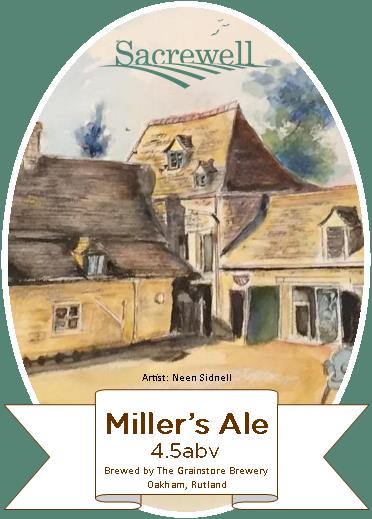